UofL serves as home base for NASA team during international competition 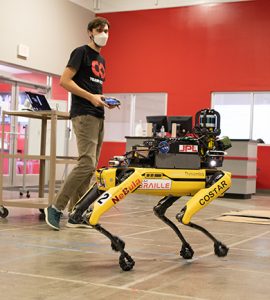 A team from NASA’s Jet Propulsion Laboratory (JPL) traveled from California on Monday, September 20 to collaborate with robotics researchers at the (LARRI) facility. NASA’s JPL is a federally-funded research and development center that works on developing new technology for robots that could be useful for future space exploration.

The 40-person JPL team, dubbed “CoStar” made the trip to University of Louisville to compete for a $2 million prize in the third and final round of the Defense Advanced Research Projects Agency (DARPA) Subterranean (SubT) Challenge. This international robotics competition is being held September 21-23 at Louisville Mega Caverns beneath the Louisville Zoo.

Benjamin Morrell, robotics engineer at JPL, is deputy team lead of CoStar. “Being out here at UofL Speed School and specifically working with LARRI is a fantastic way for us to be preparing and ensuring our robots and associated software are ready for competition,” said Morrell. “It’s an incredible facility.”LARRI Director Dr. Dan Popa said the event is a great opportunity to showcase Speed School and the robotics program at the brand-new, cutting-edge facility.

“It is a really good spot to support this kind of competition because it has easy in and out access, and the facility itself was built in such a way to quickly deploy robots and test them,” said Popa. “We are pleased to see it being used to maximum capacity.” 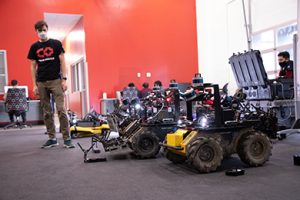 In the DARPA SubT Challenge, CoStar, (which is a collaboration of JPL, CalTech, MIT, Kaist (University in Korea) and LTU (University in Sweden), will compete against seven other teams of autonomous robots exploring unknown environments including cave, urban and mine elements and will demonstrate how their autonomy, networking, perception, and mobility capabilities perform on physical courses underground.

Morrell explained that the system is designed for robots to go in quickly, map what a disaster area looks like and report back to a human rescue crew so they can pinpoint where survivors are and avoid areas that are dangerous.

“For a NASA application, we are looking at cave exploration on the moon and Mars, using this same kind of technology to gather scientific information,” said Morrell.

With a new research facility soon to open, Popa said the university is currently recruiting faculty from this same elite robotics community from around the country and the world.

“This helps visibility, and for people to know about what we’re doing here,” he said.

Speed School students also reap the benefits. “It’s a great opportunity for them to be exposed to this, said Popa. “The challenges that DARPA has put together have very difficult feats, and these teams are the cream of the crop in research around the world.”

With each new challenge, DARPA has played a role in moving robotics forward, according to Popa.

“Every five years DARPA has issued a new challenge and they have included autonomous driving, humanoid robots and now this subterranean challenge,” he explained. “All these challenges are pushing development not just at universities but at companies, and eventually they come into the commercial sector.”

JPL's team made the trip to UofL to compete for a $2 million prize in the third and final round of the Defense Advanced Research Projects Agency (DARPA) Subterranean (SubT) Challenge.