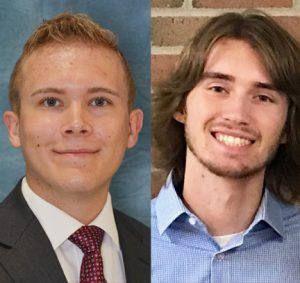 For the competition, colleges and universities put together their top tech-savvy students and form teams that build and defend their mock production business infrastructure from professional “hackers” who are given the challenge to take each team’s production systems offline and breach their security. While the teams work hard to fend off hackers, the competition judging staff deploy network enhancement and upgrade challenges to teams, judging the team’s performance, scoring and supporting the overall event.

Speed School Lecturer Jana Godwin, who supports the team, said she was impressed with their tenacity. “What an awesome group! Even though we were somewhat short-handed, the team came together and powered through to 1st place in the Invitational challenge against seven other teams,” she said, including second place winners Purdue and third place-winners Indiana University Bloomington. Next up will be the actual official state competition in January 2021, which will pit the team against Northern Kentucky University and Eastern Kentucky University.

The team was led by Jackson Paul, and also included Noah Tongate, Meghan Mihaljevic, Hoc Nguyan and Hao Wang. Of the team, only Jackson and Noah had experience with the competition, one that was made more challenging and complex when relegated to a virtual setting, said Jackson.

“Traditionally, the state competitions are held at your own school instead of everyone being at their own homes,” he said. “You would normally go into a room together, where you could yell across room to someone or go to someone’s desk and talk to them in person. We had to find new ways to organize files and communicate with each other,” said Jackson.  “Before we could sit two people next to each other and they could talk quietly while everybody else working or talking but this way one person talks and everybody else has to be quiet,” he said.

A graduate student who will receive his Masters in Computer Science & Engineering in spring 2020, Jackson is in his fifth year involved with the Cyber Defense Club, an informal group part of the student chapter of the Association for Computing Machinery (ACM).

Jackson said his fascination with cybersecurity is “because I’ve always like doing something people wouldn’t expect me to do with the computer. People will say, ‘I put a password on my Wi-Fi and nobody can get into that, and I like to say, ‘I’m in your Wi-Fi right now,” he said. “It’s kind of me showing off a little bit but I also just find the whole idea of just doing it fun, figuring out how the system works and  how I can make it kneel to my own will.”

As a co-op student, Jackson worked for General Electric (GE) doing rotations on both sides of the cybersecurity world: one on the networking team and one on the security team. Currently, he is working part-time at Speed School IT and is hoping to find a job amidst the pandemic. “There may be hiring freezes right now, but here is high demand for cybersecurity in general across the board,” he said.

Jackson’s teammate and partner in crime, so to speak, Noah Tongate, is a Senior CSE and this is his third year being involved in the Cyber Defense Club and the competition. Noah is an Offensive Security Certified Professional (OSCPD), and said his time in college has fed his fascination with “trying to get a computer program to do something it’s not supposed to do.”

Noah just accepted a position as a security engineer at a Boston-based cybersecurity company and will be working part-time starting in January, moving to full-time after graduation. “My job will be the one to hack into systems, so I can deal with any security vulnerabilities where someone could exploit and maliciously hack into.”

Cybersecurity is more important than ever, according to Noah, with the pandemic increasing the VPN networks operating from homes.  “We all have to make sure our computer hygiene is up to par because if you have to connect back to your actual work place and there is a chance if you have a virus it could transfer.” As far as bad actors are concerned, Noah said keeping ahead of the bad guys is key. “The main challenge in the industry is to stay up with the different threat actors, from China, Russia and all over the U.S., too.”

How did Jackson and Noah lead the UofL Cyber Defense team to victory in the competition?

Both Noah and I brought lot of experience to table,” said Jackson. We’ve been developing a game plan throughout the years of exactly what we need to do as soon as we sit down – trying to stop them from hacking and closing everything off as fast as we can,” he said.

The competition provides a valuable networking opportunity for students interested in cybersecurity, said Noah. “The further up you go the more people look at your resume’. The UofL team when Jackson and I were freshmen went to Nationals level of the competition, and most of that team got hired by the FBI,” he said.