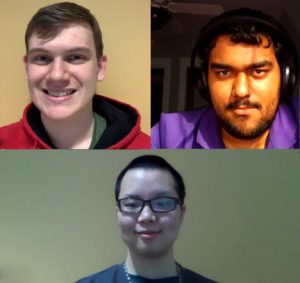 Two teams of Computer Science Engineering students who participated in the Mid-Central Regional of the International Collegiate Programming Contest (ICPC) were the first ever to qualify for the next tier in the competition, the North America Division Championships, to be held on April 22, 2021.

The ICPC is an annual multi-tiered algorithmic programming competition among the universities of the world, operating autonomous regional contests covering six continents culminating in a global World Finals every year. In 2018, ICPC participation included 52,709 students from 3,233 universities in 110 countries.

For this computer programming competition, teams of three, representing their university, work to solve the most real-world problems, fostering collaboration, creativity, innovation, and  the ability to perform under pressure. Teams challenge each other to raise the bar on the possible.

At the Mid-Central Regional, University of Louisville’s two teams competed for five hours against top tech schools such as Illinois Urbana Champaign, IIT, NKU, Northwestern, University of Kentucky, Vanderbilt, Washington St. Louis, and many others (total of 60 teams). Traditionally, the teams compete in person and share one computer, but this year’s competition was all held online.

“ICPC is like the Olympics for the programming world,” said Altiparmak. “It’s an international event that is highly competitive.”  Altiparmak has served as faculty advisor for the ICPC teams since 2013, and set up a website platform with thousands of problems for students to solve over and over to keep improving their time and knowledge. This preparation and training was instrumental to the team’s success, said team members.

“Starting our training even earlier in December 2020 gave the team more time for practice, and. everyone tried to improve their scores, said Hao Wang.  Caeden Whitaker said Altiparmak pushed participants to reach higher goals, inspiring them to up their game. “He set a benchmark of 200 points on the website, and that encouraged people to study more and participate in practice contests in weeks leading up to the competition,” said Caeden Whitaker. “He also had us all compete in a North American qualifier as a test run so we could better understand our team dynamic,” he said.

Team member Sidharth Sundar said he felt confident going in to the regional competition. “I thought we had a much stronger team than previous years. Of course, I was ecstatic when we qualified.”  The Black and Red teams’ next challenge will be the North American Divisional Championships (NADC) next month on April 22. Team Black is ready, said Sidharth. “Aspiration-wise, we would love to get to the next level of the North America Championship,” he said.

Beyond the fun and learning experiences offered by the competition, ICPC can influence career opportunities for computer programmers who are noticed by Silicon Valley giants like Google, Facebook and LinkedIn for future employment.

“It’s a plus on our resume’ since ICPC is a really important worldwide competition that has been around a long while, said Hao. “It can help divide us from a lot of other employees trying for a job.”

Caeden agreed that competing at this level will be of benefit when job-hunting.  “When it comes to getting the job, most will require you to do a coding interview and solve a problem you didn’t know in advance.  Having the experience of solving problems quickly and knowing the algorithms, those interviews will be much easier for people who have competed. That will be an advantage for us.”