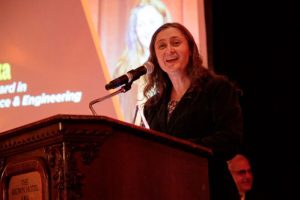 Currently, Saka is a Senior Applied Science Technical Leader at Microsoft, working on improving Power Apps, a low code/no code development tool. Previously, she worked on AI Builder, an automated machine learning solution as well as personalized content selection and recommender systems as an applied scientist, distributed machine learning algorithms as a software developer, and on-display advertising as an applied researcher/scientist. She was the founding Vice Chair of ACM SIGKDD Seattle Chapter.

Saka said her Speed School experience got her interested in applied research, influencing her path to her current career. “I learned how to work on real-life problems to improve lives,” she said. Saka also said she believes the most important thing Speed School offers today’s generation of young people is “how to be a self-sufficient and independent tech visionary.”

“I am honored by this award,” said Saka. “Moreover, I am very excited for the opportunity to re-connect with the UofL family and to remember the beautiful memories.”

Saka was presented the award during Speed School’s annual awards dinner at the Brown Hotel on Oct. 21, 2022.