A team of electrical engineering students redesigned the controller and put together a new digital carrilon microcontroller.

A time-honored and familiar sound to most students on the University of Louisville Belknap campus is the Clock Tower tolling the hour and playing the Alma Mater music at 12 p.m. daily.

What many students may not know, however, is the system responsible for that reliable ringing was from the 1980s, and was in frequent disrepair. But thanks to a group of Electrical & Computer Engineering seniors, the Clock Tower has now been automated and upgraded. The ECE students who designed and created the new system are Rio Brittany, Andrew Franxman, Johnathan Frech, Nicholas Westurn and Brian Mortberg.

Dr. Andre Faul, Assistant Professor, Electrical Engineering, was approached by Josiah Brock, Audiovisual Coordinator in the Office of Student Involvement in Fall 2020 to see if a redesign of the old sound system could become a Capstone project for his students. It was accepted as a Capstone in December 2020, and work on the project began in January 2021. The project was completed in late April and the students physically handed off the new system to Brock on April 27.

Faul, who advised and guided the team, said the project was intriguing because the team would have to redesign the controller and put something together at a lower cost.

“The team’s design put everything together to program a new digital carrilon microcontroller that would take over the functions of the previous controller,” he said. “Once the device is programmed and synchronized to the national clock standard, it is mostly hands-off and functions automatically to create the necessary sounds when needed. It includes a digital interface users are able to utilize to modify, add sounds or reprogram if necessary.” 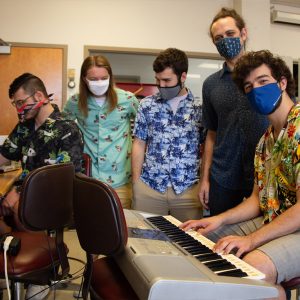 Rio Brittany, one of the students involved in the project, said the whole team was interested in this as a Capstone project.

“For me, I have a background in music and play guitar and was interested in the audio aspect of it – that there were speakers and could be instrument interfaces and outputting sounds,” Brittany said. “That’s something we haven’t got to work on too much as undergrads.”

“We identified what we needed: a microcontroller to operate the code, a midi device to be able to send and receive midi signals, and an audio interface.” he said. “From there, we branched out and some of us isolated specific parts we could use, while others started working on the coding aspects.”

Brittany said each team member focused on their individual strengths, while also working in partnership with the entire team.

“We acquired off-the-shelf items that we combined for the design, and everyone took an aspect they had strengths in,” he said. “I did some of the midi software that connected the keyboard, Nick worked on the user interface, Andrew is very familiar with Linux so he did a lot of the back-end code, and Brian and Johnathan worked on the hardware aspects and documentation,” said Brittany. “It was a really good collaborative effort.” he said.

One of the challenges of the project, according to Brittany, was the former audio system was proprietary, and only the company had the schematics for it, which meant a workaround had to be created to be convert to .wav files to upgrade the controller.

But the team was able to overcome the obstacle, as well as a few others, and for the seniors, it was a great way to end their undergrad careers at Speed School.

“It’s been like a mad dash to the end, especially with getting the parts, but it feels really satisfying to have this accomplishment,” said Brittany.

“The most gratifying part is playing a song and hearing it play it back to you,” said team member Brian Mortberg. “It’s very rewarding in terms of knowing your system that you and your group designed actually works, and knowing that something you do could be implemented for the whole school.”

Dr. Faul noted that now whenever the chimes play, these students know they had a part in keeping the campus icon ringing.

Westurn agreed. “I feel pretty excited that we kind of have a legacy on campus.”

Related
Benefits of a Capstone Partnership