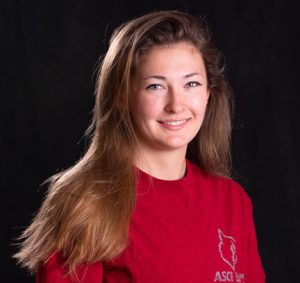 Civil Engineering Junior Sophie Lipomanis is kind of a rock star in civil engineering. Named for a second year in a row as a national spokesperson for American Society of Civil Engineering (ASCE), the transfer from Rutgers University has also excelled in ASCE conferences, including being named Outstanding Student of the Year in 2019, a national award presented in front of 400 professional engineers at the Construction Institute Summit in Los Angeles. Locally, she was instrumental in driving her ASCE student chapter to exponential growth, and being named the 2020 Student Organization of the Year.

The latest in her current collection of kudos is her selection by ASCE to be one of only three speakers in the country on a “Dream Team” virtual panel of Women in Engineering on Tuesday, November 10 at 1:00 p.m. EST. The panel will be presented in concert with a free film screening of Netflix’s award winning documentary, Dream Big: Engineering Our World. In addition to the film, ASCE is organizing the panels so those interested can join live conversations with these Dream Teams of young, diverse engineers.

You can register here to view the film and women in engineering panel on November 10, or any of the scheduled panels.

“I was asked by ASCE if I would be interested in being one of the panelists, and when they reached out, I couldn’t say no,” said Sophie, who is on co-op in New Jersey this semester. “It’s an exciting opportunity,” she said.

Sophie joins the illustrious company of two other woman engineers: Menzer Pehlivan, one of the stars of Dream Big and a geotechnical engineer who specializes in earthquakes, and Monica Morales, a water engineer based in Los Angeles helping to solve future droughts in Southern California.

Sophie was the only undergraduate asked to participate on any of the Dream Team panels, which are held November 10, 14, 17 and 24. Besides Women in Engineering, other panels featured include Cities of the Future, Black Engineers, and Spanish-language Engineers.

Narrated by Academy Award® winner Jeff Bridges, the Dream Big film is a first of its kind for IMAX® and giant screen theaters and features feats of engineering from the Great Wall of China and the world’s tallest buildings, to underwater robots, solar cars and smart, sustainable cities. Dream Big celebrates the human ingenuity behind engineering marvels big and small, and reveals the heart that drives engineers to create better lives for people around the world.

“We hosted a screening of the movie at one of our school events,” said Sophie. “It is talking about how engineers are shaping the world of tomorrow.”

At Speed School, Sophie said she has enjoyed the school’s more close-knit culture and feels supported in her dreams and goals. “It’s not a huge program, so I feel like I actually know my faculty, Dr. French from ASC and Dr. Sun, and many others,” she said. “My advisor Natalie Oliner has been fantastic, and Heidi Neal, Dean Collins, Gail DePuy. Really, I could just say everyone at Speed School.”

Passionate about STEM education for younger students, part of Sophie’s ambassadorship has been about being an advocate in schools to introduce students to creative and advanced manufacturing tools like lasers, 3D printers and more.

Sophie said she and her other Women in Engineering panelists want to appeal to that audience. “I know we will talk about our experiences as engineers, and we want to make sure we are presenting our information in such a way as to inspire young people to pursue a career in STEM,” she said.

After graduation, Sophie plans to serve as a US Naval Officer with the Civil Engineering Corps as part of the Sea Bees (Construction Battalion). “The Sea Bees are deployed often times in the event of a national emergency,” said Sophie. “When a hurricane hits, you go and civil engineers do things like build emergency port structures. In Student Council and ASC, I liked helping people and this is serving your country,” she said. “It’s been my dream to do that.”