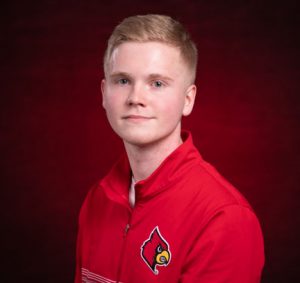 For native son Dylan Boone, University of Louisville has always been in his DNA. “UofL has been a part of my life, part of my family dynamic,” he said. “UofL is kind of one of the heartbeats of the city.” It was no surprise to him, then, when Speed School was his choice when he toured engineering schools.

“I really loved the atmosphere,” said Boone. “I loved how accessible the professors were when I got down here, and of course the great co-op program was what brought me to Speed School more than anything,” he said.

Four years later, the chemical engineering senior finds himself being honored as the Outstanding Student/Banner Bearer for the May 2022 graduating class. The Outstanding Student Award is given to the student who most exemplifies the attributes of the college, which include character, leadership, service and scholarship. The recipient is honored in the University Commencement Book, and will serve as banner bearer, leading the Speed School graduates into the university-wide Commencement Ceremony.

“If you had told me when I was coming into Speed School that I’d be named Outstanding Student, I really would have doubted you then because I didn’t have much confidence in my own abilities.” said Boone. “But now after coming through the program, developing myself, it’s something that I’ve worked towards, and I realize now that I’m not overwhelmed by it.”

From a young age, Boone was interested in the fundamentals of engineering. “I’ve always been one of those STEM kids,” he said. “I had really good physics and chemistry teachers who made science seem cool and interesting and hands on.” But it was a trip to visit his dad at work that sealed the deal for chemical engineering. “My dad has worked in the distillery industries for the last 20 years as a controls engineer, and my senior year of high school, he toured me around, and I just kind of fell in love with everything I saw,” said Boone. “I remember going home that night and searching what kind of engineer makes bourbon and I saw a chemical engineer, and there it was.”

“Engineering in general, it makes you use all sides of your brain, you know? It it’s multifaceted in that it’s both a science — you have to know the numbers, you have to know logic, but there’s also an art to it,” he said.

Boone’s passion for research stems from his desire to delve into the unasked questions. “Coming up with your own question and then seeing if you can prove it is something that I really enjoy doing,” he said. “Starting into it, learning new skills, that’s probably the most attractive part of research to me. You get to really develop yourself on your own time.”

Boone’s current research is on bio encapsulation and molecular simulation. “It’s not something that was in my comfort zone about two years ago,” he said. “In the chemistry department, we are trying to develop this silica gel that you can store vaccines in,” Boone explained. “Typically, whenever you freeze dry them and heat them back up, they can get damaged, so if you don’t have to go through that process, you can get a longer and cheaper freeze drying storage but without the freeze drying,” he said.

Boone said his involvement in the American Institute of Chemical Engineering (AICE), an association for which he serves as president this year, gave context to the classroom. “I’ve been involved since freshman year, and I started off as an event coordinator and started running plant tours and distillery tours. It really helped bring chemical engineering that I was learning my first year here into a real world environment,” he said. He also got the opportunity to meet upperclassmen who had been through similar experiences, and that was helpful. “Actually, AICE is something that has defined my Speed School experience,” he said.

Despite being a “STEM kid,” Boone is a bit of a renaissance man. He is minoring in classical studies, and is the president of the Classics Society. He learned Latin in high school, and fell in love with it. “Latin to me is kind of like a puzzle; there are the corner pieces of the language, and then you can fill in all the fluff in the big picture itself later.”

The Outstanding Student has also worked as a REACH tutor for both chemistry and Latin. “When I was coming through the first year or two in Speed School, I really enjoyed learning from the kids who were above me and hearing what they had to say about their experiences,” he said. “I thought that I owed it to both the people before me, and to the people coming after me, to get involved in REACH.”

Boone’s hard work, academic achievements and commitment to service have paid off – in a dream job. “Immediately after graduation, I’ll have the summer off, and then I’ll be starting a new position as a process engineer at Exxon Mobil in Houston, Texas, at their Baytown facility,” said Boone. “It’s a new city, new job, and I love the field that I’m going in, so I’m really excited,” he said.

For Boone, Speed School, and the guidance of the professors, and the opportunities of extracurriculars, and the rigor of the academics, all made him who he is today.

“Speed School really gives you a unique place to kind of grow into your own and develop who you are as a person,” he said. “Speed School is really good at helping to give you the resources to do that, and the abundance of friends and professors and faculty to help you shape who you want to be.”