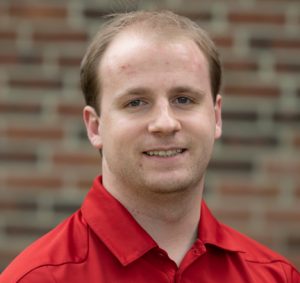 Speed School Chemical Engineering graduate Eric Hahnert said it was his opportunity to study abroad as a James Graham Brown Fellow with Engineers Without Borders that opened his eyes to the service side of engineering. “I spent the summer after sophomore year in New Zealand working on a clean water project, and that began my dedication to creating devices or discoveries immediately useful to people,” he said.” Eric has not stopped in his international travels or in this quest.

Eric graduated from Speed School in May 2019 with a degree in chemical engineering. He recently returned from several months abroad as a Fulbright Scholar. Fulbright is the largest US Exchange program for grad study research and teaching, promoting cultural and educational exchange and involving more than 140 involved countries and 8,000 grants awarded annually. Eric was one of 8 student grants awarded this past year.

In Finland, he studied with Professor Orland Rojas at Aalto University and spearheaded a project to develop a safe water filter detection system that is also a small and energy self-sufficient device. He worked in the BICMat (Bio-based colloids and materials) group with 20 other researchers on the project which is focused on addressing the clean water crisis in the world.

“Nearly 850,000 people die each year as a result of drinking contaminated water, almost 400,000 which had some sort of filter,” said Eric. “Current detection systems that warn you or replacement or when levels have gotten too high are large and bulky, use expensive materials, require an external energy source, and require frequent maintenance,” he said. What Eric worked to develop was a way to harvest energy from water flow In order to power the wireless communication. The system produces its own energy using cheap and renewable materials.

“We are using nano-cellulose and carbon nanotubes to produce an energy harvest system that can detect pressure drop and heavy metal presence. It’s a way to prevent those 4000,000 deaths a year due to not knowing the water you were filtering was no longer being filtered properly,” he said.

Dr. Gerold Willing, Interim Chair and Associate Professor in Chemical Engineering, made the connection with a professor he knew in Finland when Eric approached him about considering study as a Fulbright Scholar. “He’s always been the top of his class, a fantastic student,” said Willing. “He was instrumental in getting the student chapter of the AIChE (American Institute of Chemical Engineers) regional conference scheduled here for next March. He is our second undergrad PhD we’ve sent to MIT. I have no doubt he’s going to be a superstar in whatever he chooses to do,” he said.

A native of Louisville, Eric was accepted to pursue his Master’s and PhD at MIT and is currently attending there, living in Cambridge. He said his family definitely had an engineering mindset. His brother, also a chemical engineer, attended Speed School as well as both his parents, who were in computer science. His father taught briefly at UofL.

Eric said he was attracted to engineering because of the intersection of science and application that engineering represented. “I always wanted whatever I did to have more of an immediate real world implication, and engineering seemed to be the right crossroads of that,” said Eric. “This Fulbright study in Finland and the safe drinking water project has world-wide implications.”

Eric said his Speed school experience influenced his career trajectory. “Co-ops were a big part of my decision to go into research instead of industry. There was readily available research opportunities with Speed School professors who were willing to take on an undergrad researcher who didn’t really know anything yet. It was so helpful to have that support and start research early,” said Eric. “Working with Engineering Fundamentals and Dr. Ralston being a TA (Teaching Assistant) and grading also helped me see what it would be like on the teaching side of things.”

While Eric is now primarily focused on his PhD studies, he said his Fulbright experience was very valuable and hasn’t ruled out doing another Fulbright as a professor and seeking out opportunities for travel abroad in the future. “I’ve always enjoyed and been interested in experiencing culture in various countries,” he said. “It helps to open you up to the different worlds and countries out there. It changes you as a person.”