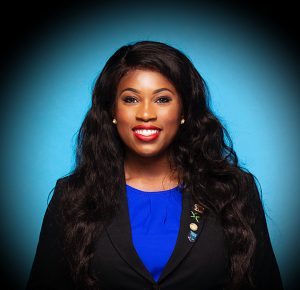 When Kendra Ford first arrived at Speed School of Engineering, she said one thing she lacked was interviewing or public speaking skills. “It was something I would run away from immediately,” said Kendra. “With each new experience, I was just glad I didn’t crumble,” she said. After six years at Speed School, however, the senior chemical engineering major has learned to excel at it. That confidence has been one key to the many leadership and academic kudos she has been awarded, including the Cardinal Award.

Formerly known as Mr. and Mrs. Cardinal, the awards are presented by UofL’s Student Activities Board and are based on academic excellence, co-curricular activities and service to the university. Her co-recipient was Praneeth Goli, a senior chemistry major.

For Kendra, who minored in both mathematics and criminal justice, this is the latest in a long list of achievements including her distinction as a Woodford R. Porter Scholar and a Louis Stokes Alliance for Minority Participation Scholar. She serves as the regional publications chair for the National Society of Black Engineers and was the recipient of the Society’s 2019 Academic Achievement Award. She received the Speed School of Engineering Diversity & Inclusion Visionary Award, is a member of the American Institute of Chemical Engineers, and serves as a mentor for the Speed School Mentoring Program. She has performed many hours of service in the community with the Fed with Faith Program, as a West End School Tutor, Cabbage Patch Settlement House Volunteer, and as a speaker for the Black Achievers Engineering Cluster.

Kendra will graduate in May, and is currently working part-time at GE Appliances. In July, she will begin a full-time job there as part of their Supply Chain Development Program.

A native of Louisville, Kendra attended Manual High School, and first became interested in chemical engineering after taking a middle school assessment. “What stood out as fascinating for me was wanting to create products that would directly impact people in our community,” she said. Her mother, a civil engineer who also attended UofL, influenced her path as well. “She pushed me to get involved in campus activities like the National Society of Black Engineers, and then I started expanding to other organizations in my passion to help others.”

Kendra is currently mentoring two freshman Speed School students, one computer science and one bio, and has also mentored lower classmen in chemical engineering as well. “What I try to offer them is help in finding resources available to boost their success. They might not even know what questions to ask. Not everyone came in to the university with the support like I had. Even just sitting and talking with them, some were able to open some doors they didn’t know existed.”

Another aspect Kendra said she emphasizes with her mentees is to remind them to foster relationships with their professors, something that aided her in her Speed School career. “Having that relationship, they knew my capabilities and knew when I was falling short, and they want to know what’s going on,” said Kendra. “If you’re there and you’re present, and the professors know how you are, they are more likely to be flexible with you. They’re not here to fail you, they’re here to help you succeed. That care – that is something that really helped me get through Speed School.”

Helping other students identify strengths and capabilities in themselves is also something she carries into her work with younger students she tutors at community service organizations like Cabbage Patch. “Being involved with the Louisville community and the University of Louisville community is very important to me. For me, it’s being present. I value seeing the impact it can make,” she said.

Kendra gave an example of a Cabbage Patch student who came in frustrated after not doing well on a spelling test. Kendra and the child sat down and went through extensive spelling practice.  “The little girl said, ‘This is so hard, this is taking forever,”’ said Kendra. “But I told her it’s going to be well worth it. The next day she came in so excited because she did so well on her test. She saw that despite what she thought was harsh studying, it was worth it and it gave her more confidence.”

In her volunteer roles, she is often sitting in an environment with young people who may not be getting the attention they need at school or home, said Kendra. “A lot of these kids have parents who don’t have college degrees, so my goal is to break that cycle, because I value education and I believe education is a way to allow you to be successful. But until you show them, some of the kids don’t believe they are capable of doing it.”