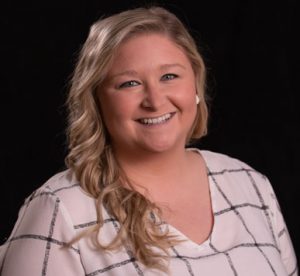 For Brittany Blake, the opportunity to take a position as Assistant Director of Advising and return to her alma mater five years ago was right on time. “The job came up at the perfect time to be the next move in my career, with the added bonus of being back home,” said Brittany. She received her Master’s in Education in Counseling & Personnel Services at UofL in 2011, where she also met her husband. Brittany previously worked as a program coordinator for UofL until August 2013, when she and her husband moved to Texas. It was there at the University of Texas at Dallas where she made her first foray into academic advising.

“Previously, I had always done programming and leadership work,” said Brittany. “I did academic advising in Texas a couple years, and got the itch and felt like I wanted to move up within the field,” she said. The opportunity to return to UofL was tailor-made for her career advancement, and Brittany’s husband also got a job at the university in facilities and event management for the Student Activities Center (SAC).

In her current role, the Jeffersonville native has a wide spectrum of responsibilities, including overseeing daily operation of the academic advising office, supervising a team of seven academic counselors, interpreting and enforcing policies and procedures, as well as reviewing and conferring BS and MEng degree applications for all seven Speed majors, among other tasks. Speed School graduates approximately 75-100 students each summer and fall semester, and 350 students in spring semester.

Her admirable command of her myriad of duties recently earned her a 2020 Outstanding Performance Award from the Office of the President, an honor which recognizes classified and professional/administrative staff for their outstanding performance and commitment to service.

It was the opportunity to develop meaningful, more long-term relationships with students that ultimately drew Brittany to pursue a career in academic advising. “Before, in program work, while it was interesting to put something on, students would just come to an event and leave,” she said. “I was looking to develop strong one-on-one relationships with students. With academic advising, you can thoroughly build something. I found that here.”

At Speed School, academic counselors are assigned to freshmen, and ideally they stay with the same advisor all the way through their MEng if they choose to stay for it. At a minimum, students are advised twice a year, but often interact with their advisor more often than that.

Brittany said it is a pleasure to see students discover their academic and career paths. “It’s cool to watch – to see them go from freshmen who are nervous and unsure, all the way through three co-op rotations and planning to go out in the world,” she said.

“One of my favorite appointment times is after one co-op rotation,” she said. “With co-op, they are out in the world and it’s a dose of reality. It feels like it’s happening before your eyes, watching them become more mature and more committed to career and education. With something as rigorous as engineering, the co-op also gives them the opportunity to apply what they’re learning, and inspires them to keep going,” said Brittany.

Her award is kudos for a job well done in a position that can often be exhausting, and sometimes a little thankless. “This work in the field of higher education in academic affairs is not something you get into for money or glory,” said Brittany. “You have to be passionate about the work you do, and be able to know it’s worth it. A student might swing by your office and say thanks for your help in getting me my co-op or admission into that grad school program, but that’s about it, so I am incredibly touched to be recognized and to have won this award,” she said.

“I am always impressed with the way she balances the care for her students, the care for the team she supervises and then the care for her work. She provides support and is always caring about who she supervises, wants their best interests to be taken into consideration as well as the students. She’s been a really great leader through very uncertain times,” said Natalie.

Brittany said that since many of her job functions are easily adaptable for remote work, COVID hasn’t affected the way she performs her work too much but the volume has grown dramatically. “We’ve seen a steep increase in emails and in students who need us,” she said. Any number of things going in a student’s life could be impacting their ability to perform in classroom. Our job is to help them through those things.”

The current pandemic has presented tough situations for many budding engineers. As one illustration, Brittany said she has a student only three classes away from completing her degree but can no longer afford it. Since COVID, she has been laid off for months, only picking up odd jobs here and there. Brittany said the student will try to come back in spring when she has saved enough money to return.

The ambiguity of the pandemic has meant Brittany and her team have also had to step up outreach and counseling efforts to students hesitant to enroll given the current situation.

“The increased volume has meant a lot of late nights, but I remain committed to our students and helping them, and sometimes that’s just what it takes, said Brittany. “For students, from the start, we really market ourselves that we can be their first stop. If they don’t know where to go or who to ask, we can help them.”

Brittany’s dual role means more frequent check-ins with her team of counselors as well as managing issues for students. “We experienced furloughs, and had to address how to help the office navigate in a literal sense through our busiest semester. But even beyond that, the unspoken work of a supervisor is having a good relationship with the team. Are they still feeling connected despite all of this, and am I individually giving each person what they need, too?”

Brittany said she found out just how special her UofL co-workers were her first few days on the job. “I started this job one week after my mom unexpectedly passed away,” she said.

“I was very quickly able to see how caring this group of people was,” said Brittany. “They supported me and lifted me up from those first few months on. This job, in addition to being just the right step professionally at the time, ended up being just the right step personally as well. With all the ways they helped me out, it has endeared them to me forever,” she said.

As an admitted “people person,” Brittany feels her job is a good fit and that she has created a close-knit team in academic advising. “I’ve always tried to establish myself as somebody who people can turn to, whether it’s students, staff, faculty or department chairs. “I want to be a resource they can count on,” she said. “It’s one of my favorite parts of my job. It makes me feel good to serve people in that way.”