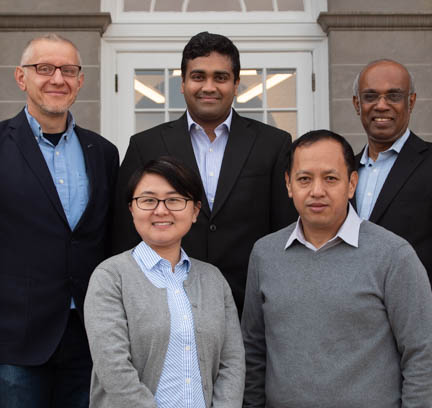 According to the Department of Energy, the average U.S. household spends nearly one-fifth of its total family expenditures on transportation, making it the most expensive spending category after housing.

Can you imagine a world not reliant on gasoline to conduct our daily driving lives? That technology may be closer than you think, thanks to renewable energy research being conducted at University of Louisville Speed School of Engineering.

In October 2019, the Department of Energy’s Office of Energy Efficiency and Renewable Energy OERE (Vehicle Technology Office) awarded a three-year, $1 million grant to Mechanical Engineering Professor Dr. Badri Narayanan, and his four-member research team to continue their work on the development of solid-state lithium batteries.

The Speed School research proposal was one of only 43 awarded nationwide for new and innovative advanced vehicle technologies research, and one of only two granted for this specific type of modeling research for batteries. These type of projects support the Energy Department’s goals to strengthen national security, support American energy dominance, enable future economic growth, and increase transportation affordability for all Americans.

Why work on better batteries? Currently, our automobiles, cell phones and laptops are powered by lithium-ion batteries, but the materials required to make these batteries are expensive, difficult to access because they are rare, and sometimes unsafe. The development of lithium-sulfur batteries are being tested to improve battery longevity and safety, and make the prospect of all-electric cars a more feasible prospect. Both lithium and sulfur are compounds abundantly available, but according to Narayanan, not enough is known about the chemical reactions when combining the two.

“If we better understand that, we can design materials for longer lasting batteries. If the project works, we could have all-electric cars that don’t require fuel. You could just recharge the battery and go.”

At the present time, Narayanan explained, “While we all want greener energy options, electric cars are too expensive for most consumers, their charge does not last long enough, and charging stations are too dispersed, not making it a viable option for most people.” The research Narayanan and his group are doing could change that equation.

While the Department of Energy is currently focused on vehicular uses for this technology, Narayanan said advanced battery systems could have other real-world applications for phones, computers and even drones. “If the military sends drones, they want long-lasting batteries which will endure through the whole mission and if they get shot at, they should not blow up,” he said.

It was the collaboration of the Speed Engineering research team that made their proposal stand out, and it is the respective talents of the team members that will ultimately fuel the next three years of work ahead:

Narayanan said he is excited to secure more resources for this work he is passionate about. “This grant will allow us to accelerate this research, which could have tremendous impact on the economy, our communities, and our future.”