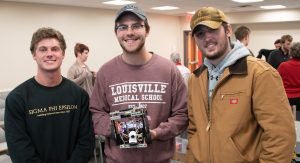 It was The Flying Dutchman that sailed away with the win. That was the colorful name of the robot that triumphed in the Fourth Annual Robotic Box-Sorting competition held in Speed School’s Duthie Center on December 3.

Teams of students from ECE 564, Fundamentals of Autonomous Robots, met to pit their autonomous mobile robots against one another in the arena. The robots the students designed using LEGOs and a Wallaby Microcontroller were a final class project. Sponsored by the Electrical and Computer Engineering Department, the contest featured robots that collected and sorted colored boxes, mimicking the concept of autonomous mobile robots transporting payloads throughout a warehouse without any supervision.

Tamer Inanc, PhD, who teaches the ECE 564 Fundamentals class, said this is the fourth year for the robot box-sorting competition but some kind of robotics competition has been held since 2005. The project teaches essential interpersonal skills like teamwork and but also a broad range of engineering skills in mechanical, electrical, and computer science. The professor awards extra points to students, based on their robot’s performance in the contest. 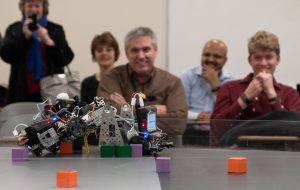 “The first half of the robotics course focuses on structured labs, but in the second half the students do their team projects, which allows them to use their imagination to design any kind of robot they want,” said Inanc. This is the fun part of the course for them,” he said.

The winning robot was designed by Cameron Onan, Clayton Reardon and Mitchell Stoltz. What was key to their success with The Flying Dutchman?

“I don’t know if you could tell, but we didn’t work too long on the physical appearance,” said Cameron. “We tried to work on the software a lot more so I think we were able to develop our program more in depth and get out of situations other teams might not have had time to account for,” he said.

Clayton said the hands-on nature of the project was different and edifying.  “Working on long-term projects is really beneficial because you have to overcome a lot of challenges you wouldn’t face if you were just taking a test or doing classroom work,” he said. “We continuously ran into obstacles and had to work as a team. That is something helpful after college, too.”

Mitchell said he enjoyed the collaboration on the project and is just happy that their “Robo-boy” brought them home a win. “Going into it, we really didn’t have super high hopes with it, but somehow we were able to come out on top.”