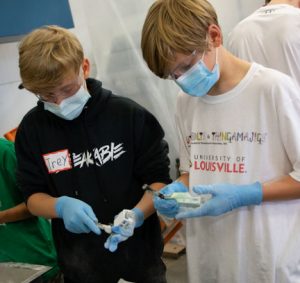 Speed School alum and mechanical engineer Shannon Kelting said her son saved his Christmas and Birthday money to buy his own 3D printer a couple years ago. A 16-year old sophomore at St. Xavier High School, Cayman was happy to find out about the opportunity to attend the Advanced 3D Printing and Manufacturing Summer Camp hosted at Additive Manufacturing Institute of Science of Technology (AMIST) at UofL’ s Speed School of Engineering. The three-day course is designed for students in grades 7-12 who are interested in using various 3D printers and related manufacturing equipment.

Cayman said he had some knowledge of 3D printing from his own use, classes in school and a former Speed School camp two years ago in the Speed School Engineering Garage.

“With this particular camp, we learned more of the machining side of what it takes to create a part,” said Cayman. “We used industrial equipment to make things, using laser cutters and other equipment. They used a HP Color printer and made a car out of it, and we used a resin printer and made very complicated shapes, like a detailed lion sitting on a tree stump,” he said.

Cayman said his interest in 3D printing stems from the creativity possible. “You can take powder or filament and turn it into something of your own. You can make anything and everything with a 3D printer,” he said.

Both Cayman’s parents graduated from Speed School with mechanical engineering bachelors and master’s degrees in 1995, and mom Shannon admits she talks up Speed School as a potential career path for Cayman. “Cayman is surrounded by two engineers that like to promote Speed School,” she said.

Two years prior, Cayman had attended Speed School drone camp, 3D printing and beginner coding camps during middle school. She said she follows Speed School on social media and learned of this Advanced Manufacturing 3D camp from Facebook. “When I saw the camp, I knew it would be big 3D printers with big componentry and he could learn the latest and greatest technology out there, and of course he wanted to go,” said Kelting.

Cayman’s father is a partner in CMTA, Inc. the largest mechanical, electrical plumbing design firm in Kentucky, where he has been more than 25 years, while Shannon retired from American Air Filter in 2017.

Gary Graf, Coordinator Engineering Technical Services at AMIST, who has run the 3D printing camps the last three years, said it includes lab tours and hands-on project based learning, with the goal of advancing knowledge about processes they might see in the manufacturing world to make things.” Graf said the camps have become increasingly popular (Speed School added a second one June 21-24 when the first one June 7-9 sold out) as students become exposed earlier to 3D printing at school and become interested to learn more. “The kids think it’s cool to design their own stuff; it’s like a modern day erector set,” he said. 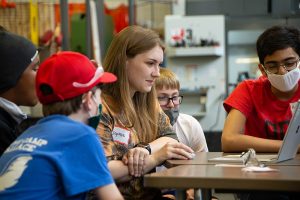 Speed School has a three-year agreement with Nuts, Bolts and Thingamajigs the charitable foundation of the Fabricators & Manufacturers Association, International® (FMA), which provides a small amount of financial, and a lot of logistical support to host the camp, said Graf.

With not enough skilled workers to meet the local and regional demand, Graf said these camps can impact the future of Advanced Manufacturing. “Since the kids aren’t starting completely from scratch, they can potentially come in with more knowledge and hit the ground running,” he said.

Kelting said that universities like UofL offering camps like this help students decide what they like and where they want to go in their future careers. “Cayman enjoys more of the coding side, so he may not be a mechanical engineer like me and his father, but he might end up a computer science engineer,” she said.

But Kelting said she promotes Speed School beyond her own family, whenever and wherever she can.

“I was very fond of my time at Speed School and I am proud to be an alum,” she said. “I always try to be an advocate and good ambassador for SS and spread the word to STEM and science teachers and everyone else to let them know about these opportunities for students.”

Cayman said his favorite part of the camp was getting to use different types of equipment not available in school like the resin printer, as well as the instructors. “The great teachers there, staff members and interns taught us so much about how to use everything and be safe with it,” he said. “It was an amazing experience.”