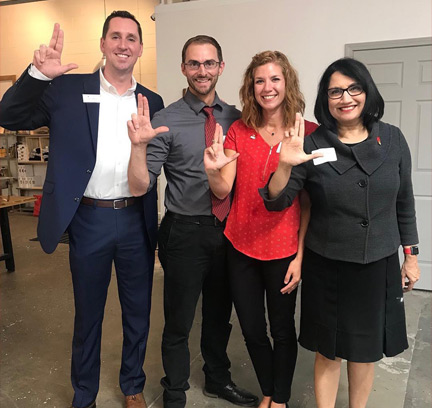 John Riley is such a true-red Cardinal fan that he and his wife, Christy, whom he met at UofL, were married in Cardinal Stadium with the reception held on the field. The alumnus graduated from Speed School in 2006 with a master’s degree in mechanical engineering, and his enthusiasm for University of Louisville has not waned. Today, Riley and his wife, who graduated from UofL Business School, are leading an effort to help take the production of face shields for healthcare workers to scale.

As Director of Maker13, a community nonprofit makerspace, as well as a research and development engineer at Samtec, Riley had seen many calls to action from the online maker community to quickly ramp up prototypes of protective personal equipment (PPE). He played with designs on the Open Source websites and eventually coordinated with UofL’s Additive Manufacturing Institute of Science and Technology (AMIST) and GE FirstBuild.

“We were already shut down to the public so we had idle equipment. We learned one 3-D printer could take one to three hours to print a face shield, so we knew that was the bottleneck,” said Riley.

What the engineer was able to do was modify prototypes and work with other local manufacturers such as Jones Plastics and Owens Patterns to customize the protective equipment to be mass produced by supply chain manufacturers. Riley was able to get a three to five hour cycle time for a headband and turn it into a 20 to 30 second cycle time. Likewise, face shield production was reduced from 45 seconds or so to a roll dye that stamps them out every 10 to 20 seconds continuously.

“That’s where we are always the bridge between the maker community and advanced manufacturing – that bridge is probably closer and quicker than people might imagine,” said Riley.

At Samtec, Riley’s current daily production capacity for the headbands and face shields is between 2,000 and 3,000 units. The engineer has also shared his mold design with GE who is now contributing to the pipeline as well as two other mold companies to help supply the needs for the rest of Kentucky and Southern Indiana.

Through Maker13, Riley is fulfilling small orders for non-network hospitals, small physicians, pediatricians, dentists, and for emergency surgeries. “There are tons of small pockets of people way down the food chain that are driving almost an hour just for seven or eight shields. That’s all they need, but they can’t get them for anybody. It’s humbling to see the healthcare workers come in and they’re so grateful.”

Riley said he can fill small orders through Maker13 (website) and anyone else is downloaded to the UofL master list of distribution coordinated through AMIST. He expects to produce 50 to 60 thousand shields in the next couple weeks. The Samtec Cares Foundation put $50,000 to cover the material costs for 28,000 to 30,000 shields, and another foundation recently stepped up to match that.

“As long as material costs can be covered, everything we make is free,” said Riley. Riley’s wife Christy is managing logistics and working with the foundations to ensure the money is spent efficiently.

For a couple who started their marriage on a Cardinal sports field, Riley said he and Christy are still committed alumni who want to do their part to contribute to the community – and the university. “We are UofL through and through.”