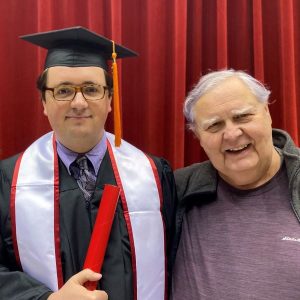 The story of Ben Nye at Speed School is one of those “It’s a small world” kind of tales. It starts with Ben’s father, Frank, who earned a Master’s degree in Computer Science & Engineering from Speed School in 1986. After leaving Speed School, the elder Nye worked in the computer science field for Corhart Refractories (now known as Saint-Gobain) as a senior programmer analyst. At the company, Frank interviewed, hired and mentored a Speed School student, Donnie Sinkhorn, for all three co-op rotations, a student who later remembered Nye and his son, Ben.

Flash forward as Frank’s son, Ben, followed his father’s footsteps into the Speed School of Engineering in 2018. “As a kid, I always liked taking things apart and putting them back together, and building things,” he said. Ben chose mechanical over computer for his engineering discipline, however.

In his freshmen year, Ben initially sent alum Donnie Sinkhorn, now Director of Technical Services at Packsize International, his resume.’  Packsize has partnered with Speed School, hiring grads, and they began a co-op program in 2021, just in time for Ben’s final rotation. Donnie Sinkhorn finally responded to Ben Nye’s three-year old email and gave him a job at Packsize. “Frank mentored me through all three of my co-ops and now I’m fortunate enough to play the role of mentor for his son,” said Donnie.

Today, Frank still works for Saint-Gobain as a freelance computer engineer, and is currently working for plants in West Virginia, New York and Canada. “Speed School gave me confidence, and I’ve been working with computers since 1986 – it’s been my life,” said Frank. “What I did in school is what I’m doing now,” he said.

Ben, who graduated in December 2021, is taking the opportunity for two months of European travel before making any further career plans. Ben said he is grateful for the opportunity Speed School gave him to get close with his peers. “I wouldn’t have been able to do the co-ops, or hang out with the people I’ve met.”

A coincidence like this is not as rare as one might think, according to Mary Andrade, Director of Career Services. “I love stories like this,” she said. “This is a demonstration of what makes UofL and Speed School special – our connections, the legacy of our program, and our extraordinary alumni that are out there for the up and coming generations.”