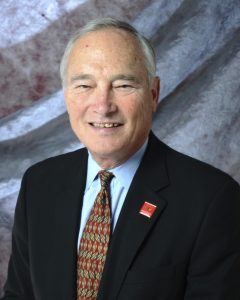 A  native of Louisville, Tony Fortwengler spent most of his formative years living at 328 Eastern Parkway, a stone’s throw from Speed School. He is a 1961 graduate of St. Xavier High School and earned his B.S. degree in mechanical engineering from Speed School in 1966.

Upon graduation, he embarked on a 30-year career in sales and systems with IBM in Louisville, Cincinnati and Dayton, Ohio. After retirement from IBM and two years of consulting, a client offered him a position as Director of Technical Infrastructure. Tony spent 12 years with Southwest Gas in Las Vegas, NV, in this position. As Director of Technical Infrastructure, his organization was recognized by CIO magazine as one of the top 100 innovative information technology units in the country.

He returned to Louisville in 2005 and is a member of the board of the UofL Alumni Association, and its immediate past president. In honor of his parents, he and family members have endowed the Fortwengler Family Scholarship Fund at the J.B. Speed School of Engineering. Tony and Alice, his wife of 54 years, have three children, five grandchildren and one great grandson.