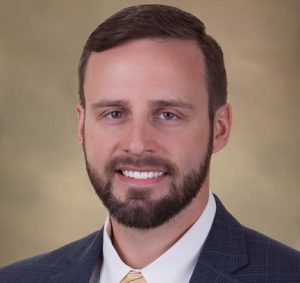 Alumnus Waylon Humphrey didn’t even apply to any other schools except for Speed School of Engineering. “I was always good with math and science and enjoyed physics,” said Humphrey. “A cousin of mine that I looked up to came to Speed and I wanted to follow his footsteps.”

He received his B. S. in Mechanical Engineering in 2008, and his Master’s in Engineering Management in 2011.  The decision to attend Speed steered him to a career with the US Army Corps of Engineers, where he was recently promoted to Chief of Operations for the Louisville District.

Initially interested in the automotive industry as a mechanical engineering student at Speed, Humphrey completed co-ops in auto manufacturing, and knew it was time to switch gears.

“I grew up in a blue collar family and was comfortable with construction, so I honed in on engineering and construction management,” said Humphrey. A turning point came when he finished his bachelor’s degree and learned Ft. Knox was looking to hire interns, so he worked part-time there as he completed his master’s. He worked on military construction projects such as barracks and dining facilities. “I really fell in love with that side of engineering,” he said. “I liked being out in the field and managing processes.”

In 2012, Humphrey was given an opportunity for a full-time position at Ft. Knox and moved from the construction to the operations division, maintaining the critical infrastructure for lakes, navigations, locks and dams.

“It was everything I had been looking for and wanted,” said Humphrey. “Ninety percent is in house – we have our own mechanics, maintenance people and park rangers,” he said. “In-house staff gives you more flexibility and control over how you accomplish task and I love that.”

Humphrey and his team of 400 operations staff are responsible for the management and maintenance of nine locks and dams, and 17 lakes across Illinois, Indiana, Ohio and Kentucky. “There is nothing better than doing a site visit on one of our beautiful lake on a spring day,” said Humphrey. These include Nolin Lake, Taylorsville Lake and Green River Lake, to name a few.

Humphrey said he enjoys spending time outside visiting the projects and his people. “One of the philosophies I have is you manage processes and you lead people,” he said. “The morale and productivity of these people is important to me. I have a relationship with the folks who work for me because I don’t want to be in an office somewhere and not know who they are.”

How did his education and experience at Speed School pave his path to success?

“The biggest use I have found is in problem solving – being able to break a complex problem down to its components, start from what you know and start eliminating variables to work to a solution in a systematic way – that is invaluable,” said Humphrey. “I would tell students today they’re never going to regret having an engineer degree, no matter what they decide to do with their career. Those skill sets are going to add value in all aspects of their lives.”

Humphrey, who did work study in the Electrical Engineering Office during his time at Speed, said he enjoyed working with the people there, and is still friends with some of the staff and professors. He said he also remembers fondly, in hindsight, late nights in the library and computer lab working with peers to grind it out during finals. “It’s painful while you’re there, but you look back on it as some of the best times of your life.”

He grew up in small town Brandenburg, KY and moved to Louisville for college in 2003. He now lives in New Albany with his wife, who works at UofL School of Nursing, and their two young daughters. Not surprisingly, Humphrey and his family enjoy hiking and fishing, and of course, being Cardinal sports fans. “We are both alums and enjoy being part of that community.”