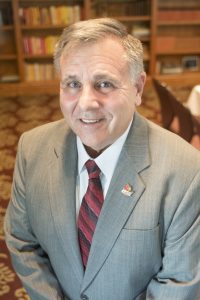 Alumnus Alan A. Kleier has distinguished himself as an engineer and been an exemplary ambassador of UofL, earning the title of UofL Alumni Fellow of Engineering.

Alan graduated from Speed School with a Bachelor of Science in mechanical engineering in 1976 and a Master’s in Mechanical Engineering  in 1977.

His 36-year career began in 1977 in domestic and international oil and gas for Texaco, working as a petroleum engineer in the producing department in Ardmore, Oklahoma. He spent 25 years with Texaco prior to their merger with Chevron in 2001. Kleier was with Chevron for 12 years and served in various leadership roles around the world.

Kleier’s experience in the diverse domestic and international oil and gas industry included responsibility in drilling, production, exploration, new field development, major capital projects, business development and commercial and fiscal negotiations with a focus on improving company safety and environmental performance in every aspect of the business.

In 2013, Kleier retired as vice president for Chevron’s mid-continent business unit. Kleier gives a yearly presentation to students at the Speed School concerning what true “success” is.

Kleier and his wife, Janetta, live in Seminole, Florida and have three children.