Nonpoint source pollutants – including sediment, nutrients, pesticides, heavy metals, and other chemicals – are a major source of water quality degradation of inland and coastal waterways throughout the United States. For example, excess sediment and nutrient loadings from agricultural areas in the midwestern US have contributed to the proliferation of harmful algae blooms in both inland waters, including the Ohio River, as well as the Gulf of Mexico.

The Hydrology and Sediment Research Laboratory in UofL’s Civil and Environmental Engineering (CEE) Department aims to improve the understanding of the source, fate, and transport of nonpoint source pollutants in watersheds. Degradation of water quality in rivers, lakes, and oceans results from interconnected hydrologic processes acting over a watershed – processes that seemingly are quite complex given the scale and heterogeneity of watershed systems. Unraveling these hydrologic processes, however, is a critical task given that improvement of water quality in freshwater systems requires enhanced characterization of such processes. In particular, understanding the pathways and hotspots of nonpoint source transport can support targeted remediation of such pollutants.

Dr. Tyler Mahoney and several CEE students lead the development of the Hydrology and Sediment labat UofL – including Matthew Arnold, Arlex Marin Ramirez, Lauren Brown, Valerie Alexander, and Nick Belen. Tyler joined the UofL CEE Department in August of 2021 after completing a postdoc with the US EPA in Cincinnati, OH. Tyler and his team employ several methods to characterize the provenance and transport of nonpoint sources pollutants, including sediment fingerprinting technology, in-situ water quality monitoring, and process-based numerical models. 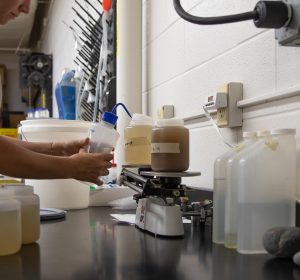 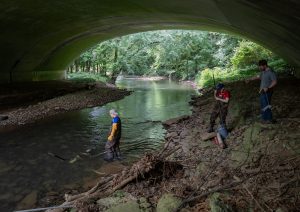 Sediment fingerprinting is an approach to identify sources of sediment in streams or rivers and determine the amount of sediment that such sources contribute to the stream network. The process involves collecting sediment samples from a stream with a sediment trap (shown in Fig. 1a) and conducting laboratory analyses to identify naturally occurring tracers (or “fingerprints”) within the sediment that can be linked to a source (e.g., shown in Fig. 1b). Such lab processes include centrifugation, freeze drying, wet sieving, and elemental analysis of sediment samples.

Numerous tracers have been implemented to fingerprint sediments in recent years, however Dr. Mahoney’s team typically employs stable isotope tracers in their analyses because such tracers are naturally occurring and can often differentiate sediment sourced from differing land uses. For example, recent studies have successfully used stable carbon and nitrogen isotopes to allocate the amount of sediment originating from forest land, reclaimed mine land, and stream banks in a (1a)(1b) watershed in eastern Kentucky. 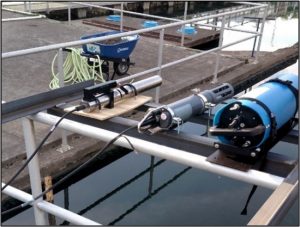 Dr. Mahoney’s team will be implementing sediment fingerprinting technology to investigate sediment sources in Beargrass Creek and Floyds Fork beginning in the summer of 2022 – two streams with recognized sediment problems in Kentucky. Dr. Mahoney’s team also uses state of the art sensor technology to monitor water quality in streams and rivers, including YSI 6-series and EXO water quality sondes equipped with sensors to monitor water depth, temperature, dissolved oxygen, conductivity, dissolved organic matter, pH, turbidity, and nitrate at sub-hourly temporal resolutions (Fig. 2). A network of these sensors is planned to be implemented throughout the Beargrass Creek watershed to continuously monitor water quality and sediment/nutrient transport in the watershed. Dr. Mahoney’s team is currently developing methods to conduct hysteresis analyses with sensor data to infer the sources of nonpoint source pollutants within watersheds.

Finally, Dr. Mahoney’s team is investigating the feasibility of utilizing process-based hydrologic models to characterize the provenance of nonpoint source pollutants in watersheds. Currently process-based watershed models are limited by the lack of data to verify the accuracy of simulating hydrologic fluxes on hill slopes and through subsurface pathways. By verifying model results with data collected from sediment fingerprinting and high-temporal resolution sensors, Dr. Mahoney’s team intends to advance the simulation capabilities of such models.

The Hydrology and Sediment Research lab aims to conduct cutting-edge hydrologic research related to nonpoint source pollutants and educate students in the CEE department on methods to monitor and model the transport of nonpoint source pollutants in watersheds. The lab is currently collaborating with other researchers at UofL’s Speed School of Engineering and in the College of Arts and Sciences, as well as with engineers and researchers from Louisville MSD, the University of Kentucky, the Kentucky Division of Water, the USGS, and the US EPA. The lab welcomes additional collaborations related to hydrologic studies in future years.