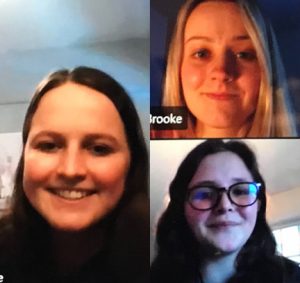 Civil engineering juniors Samantha Mueller, Morgan Osborne and Lauren Kelly have all just finished their second rotation of co-op. They shared their thoughts about school and co-op during a pandemic.

For Samantha Mueller, local company Messer Construction has been her co-op site for two semesters. As a project engineer, she is a liaison and aids communication between subcontractors and owners while assisting superintendents and project managers on site, something that appeals to her intense organizational skills, she said. “I am gaining skills and able to pick up new information faster because every day I do something random and new,” said Samantha. “It keeps me on my toes and I don’t get bored. It’s one of the challenges, but it has also helped me develop in that aspect.”

Lauren Kelly, working with the Whiting Turner Contracting Company in Washington, D.C. said her co-op originally appealed because she could return to her home nearby in Northern Virginia.

Like Samantha, Lauren is in a project manager role, in her case helping her co-workers to execute a subcontract phase one on a tile and countertops package, and has assisted with quality control as well. Lauren said seeing the fruition of the work has been gratifying.

“I have literally been on a construction site now for months on end,” she said. “When I got there it was just a hole in the ground, and now we have topped off two residential buildings and it just keeps going,” said Lauren. “I am learning so many new things and it is so interesting all the time.”

Originally from the mountains of Southeastern Kentucky, Morgan Osborne has returned to the area to do bridge rehabilitation and reconstruction for her second co-op rotation. “The people in the mountains live on the other side of streams, which means when they go home they have scary bridges to cross,” she said.

In her first co-op rotation, she worked in an office and did design work for parking lots. “This time I am on the flip side, involved in inspection,” she said. “As a runner, I take concrete samples and materials and take them to labs,” said Morgan.

The co-op environment that Speed School offers is ripe for learning and for networking, said Morgan. “With co-op, you get to see what Civil Engineering is really like, and I’ve made lots of connections in both Louisville and Southeastern KY, that’s how I’ve benefitted most.”

One aspect of civil engineering that Morgan said she has found appealing is one she believes also attracts other women to the field: the humanitarian aspect. “It’s about going out and really helping communities and making a difference in their lives. Civil in particular, is the branch of engineering with a lot of human interaction.”

Lauren agreed. “I always liked math and science when I was younger and when I was deciding what branch of engineering was best for me, I saw in civil I could do something interesting, and help communities within that,” she said. In fact, she hopes one day to pursue a career that involves sustainable living and incorporates affordable housing.

Coming of age in the 2000s has been influential in their decision to pursue engineering, said the students. “It doesn’t hurt that we heard over and over about women being encouraged to go into STEM careers,” said Morgan.

Would these budding engineers recommend this career path to other women?

“You have to be prepared to work really hard and it takes time,” was Samantha’s advice.

“If you like calculus and physics (you don’t have to love it) and you have a strong work ethic to push yourself, you can do it,” said Lauren.

“If you have a good foundation and enjoy math and science, it can be the best of both worlds- real life application and hands on work,” said Morgan. “For that, there is no better major.”

Lauren said she noticed on her first day of fall semester in 2019 (when classes were still in person) she looked around and saw a good number of women in her class, at least 50 percent. “It was reaffirming, like hey we got this, we can do it,” said Lauren. “In fact, one lab was entirely female, which was the coolest thing ever,” she said.

On the job site, it is still male-dominated but that is slowly changing as well, noted Morgan. “Right now, it is still mostly older men, but if we continue to see such a large percentage of women in civil; in five or ten years there will be a ton of women in the field.”