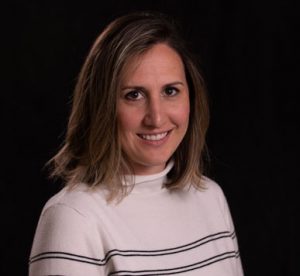 At just 33 years old, Dr. Adrienne Parsons is a licensed engineer, Speed School Engineering Fundamentals instructor, and recently completed her PhD in Mechanical Engineering. But in her uber-achieving family, she is still considered the black sheep.

We joke because I am now a doctor but not a real doctor,” said Dr. Parsons. One of four sisters, Dr. Parsons stands alone as the only engineer in a family of medical doctors and nurse practitioners.

“I always wanted to talk about numbers and how things work, not how people work,” said Dr. Parsons.

It is one of the main things that drew her to the field. “I was always quite good at math and physics. Before college, my dad, who was a drafter and worked with engineers a lot, set up a meeting with a female engineer I could shadow, and that set me off,” she said.

A native of the Northern Kentucky town of Independence, Dr. Parsons came to Speed School while two of her sisters were also at University of Louisville for medical school.

What was the Speed School experience like for Dr. Parsons? “It was challenging but in a good way,” she said. “The people I met here will be my friends the rest of my life. I met my husband through engineering when I did my co-op with GE. What I can say is it’s such a feeling of accomplishment, so give yourself a pat on the back. It’s a difficult thing to get an engineering degree.”

With her sisters nearby in medical school, Parsons said she felt lucky to have a bit of a home base at UofL while being away from home. “I also had a really good friend from high school who started in engineering with me. Having a friend really helped ease into starting at a school where you knew no one, especially in the engineering department where there were not a large number of females.”

Only one other woman was in her Speed School graduating class in mechanical engineering. Dr. Parsons admits she did encounter gender bias in the male-dominated mechanical engineering field. “My love of engineering outweighed any negativity I had encountered. I always keep a positive attitude and try to remember why I went into the profession. Now as an instructor, I hope other women can see me up there, and one day we can get to the point where it’s 50-50 women and men in the field. It also feels good to know that I have played a small part of building it to that 50-50.”

After graduating with her Masters in Mechanical Engineering, Dr. Parsons didn’t stray far from Speed School. Her first job in industry was with UofL as an engineer working for Kentucky Pollution and Prevention Center. She moved from the center after two years, continuing in the arena of environmental engineering, to work with Harshaw-Trane at Fort Knox. She received her professional engineering licensure in her four years with the company.

“It was a great learning experience, but I knew if I wanted to stay at the company, I don’t think I could have stayed as passionate about the work as I would have liked,” she said. “I wanted to work with people to help fix problems.” That is when an idea that had been in the back of her mind for years came to fruition – to return to school for her doctorate.

Dr. Parsons’s PhD project is a testament to her continuing interest in renewable energy. Her all-season heat pipe system is about finding a way to heat and cool a space using no energy except the sun and the sky.

“To heat a space, you collect the sun’s rays,” Dr. Parsons explained. “A heat pipe is your mode of heat transfer to send heat to a thermal mass (a water tank). In the winter the thermal mass keeps the space warm,” she said.

“In the summer, it’s opposite. The heat pipe orientation switches, so that the water tank absorbs the heat from the space and radiates it out to the night sky.”

A prototype does currently exist for the heating season, but not yet for cooling. Dr. Parsons’ project involved simulation work to investigate creating that cooling system.

Returning for her PhD ultimately led her down a path to discovering her true niche – teaching.  Beginning her doctoral studies, Dr. Parsons was committed to help finance her schooling since she and her husband had returned to being a one-income family. Fortunately, her industry experience and credentials as a licensed engineer helped land her a Teaching Assistant position at Speed School. Her course load has expanded each year since, and she became full-time Speed School faculty in 2017.

“The last few years here teaching in Fundamentals of Engineering Department has been such a validation of being on the correct path,” said Dr. Parsons. “I love meeting the new freshmen. They are all excited about coming here. They want to learn; they want to be here. It’s amazing to be able to teach people who are so passionate about their future profession. I don’t know that you get that in a lot of other college majors.”

The professor said she believes what Speed School offers that is somewhat unique and so beneficial for students is being able to form peer relationships to take them through what is often a rigorous and challenging academic experience. “Through the Fundamentals Department, the student is immediately introduced to people they’re going to know very well for the next five years. You have that camaraderie and form a bond where you are all going to struggle, succeed, and persevere through your experiences together.”

Dr. Parsons said she hopes to continue teaching her engineering courses for a long time to come. “There were some faculty I had as a student in mechanical engineering, particularly women, who inspired me and pushed me as a mentor,” she said. “I hope my female students can look at me and think, ‘If she can do it, I can do it, too.’”