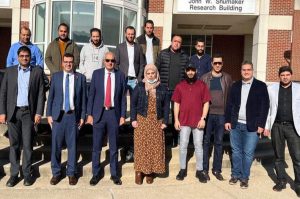 The University of Louisville J.B. Speed School of Engineering has announced a five-year Memorandum of Understanding (MOU) with Al Alamein International University (AIU), New Alamein, Matrouh, Egypt. The agreement, signed November 20, 2021, between UofL and AIU establishes an undergraduate Bachelor’s degree partnership in Bachelor of Science in Bioengineering and Bachelor of Science in Computer Science and Engineering degree programs. The agreement is known as a “2+2 Program”, meaning 50% of the classes will be held at each institution, for both students from UofL and AIU. Students in this program will earn a UofL degree.

UofL and AIU intend to enhance relations between the two universities by developing an academic and cultural exchange in teaching, research, and other activities. UofL seeks to increase opportunities for students outside the United States to take UofL classes and obtain UofL degrees, while AIU has expertise and endeavors to support UofL with on-site recruitment, logistical and administrative support, and academic delivery of the Program.

“I am excited about this new partnership with AIU. It provides Speed School with the opportunity to experience an influx of students from a growing region of the world and have fruitful cross-cultural fertilization with our partners in Egypt,” said Collins. “Our agreement also opens up opportunities for other colleges within UofL and AIU to establish similar partnerships and share in these benefits.

The 2+2 Program brings to fruition a program that was the brainchild of El-Baz, who worked with Rockaway and Collins to secure the details of the partnership.

El-Baz’s ultimate vision was to create an avenue for Egyptian students to obtain a degree from UofL. To that end, El-Baz approached Professor Khaled Atef Abdel-Ghaffar, the Minister of Higher Education and hosted Abdel-Ghaffar at the UofL campus in January 2020, to show the world class research, facilities and resources available to offer a high quality education to Egyptian students.

The bioengineering professor said an international partnership like this will reap benefits for both universities, including student recruitment for Speed School and offering a high-quality engineering education for Egyptian students while offering an enhanced cultural experience for all students in the program.

The agreement will enable UofL to start offering classes to students at AIU in the Fall 2022 academic term. Under the agreement, students will spend their first three years of their engineering program at Al Alamein University in Egypt, and two subsequent years at University of Louisville to complete their degrees. (In Egypt, a Bachelor’s degree requires five years). Both universities plan to start similar partnerships with other disciplines that are offered at UofL, both in and out of the engineering school. “This is just the beginning,” said El-Baz.