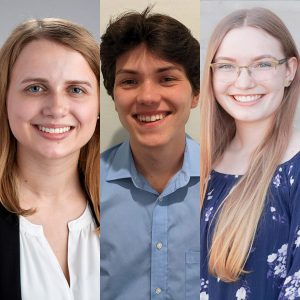 Ekaterina Kovatsenko is already currently working internationally in Aachen, Germany for a medical devices company that specializes in oxygenators. For her Fulbright, she will travel to Bulgaria for a year to teach children in the 8th, 9th and 12th grades mathematics, English and a bit about American culture.

“My parents are from Ukraine and Russia and I grew up with all sorts of Russian and Ukrainian sorts of influences, so I was really interested in applying to an Eastern European country to get closer to my family roots,” said Kovatsenko. “It will be very interesting to me to see how people live because each Eastern European country has a different character to it, so I was really drawn towards that.”

Kovatsenko said her experience at Speed School opened doors she didn’t expect. “It gave me plentiful opportunities to do all sorts of things that were beyond my wildest imaginations. Right now I’m doing research and testing at a biomedical device company in Germany, and I wouldn’t have imagined I’d be doing that when I was a freshman,” she said. She said she is most excited to be able to meet and get to know her new students in Bulgaria.

She said she takes a couple of key takeaways from Speed School with her on her travels. “Co-op at three different places taught me a lot,” said Kovatsenko. “Rather than getting super in-depth knowledge in one area, I’ve been able to learn about a whole breadth of topics, from research to working in a hospital to working within industry,” she said. “That’s helped me contextualize everything and more technical skills that it’s not practical to get from a rigid curriculum.”

The bioengineer said Speed School taught her about herself as well. “At first I was all-business at Speed School, just trying to guarantee I would get the highest paying job,” she said. “But getting to do certain things that I was truly passionate about made me understand how important it is to do things you care about, for your soul and your mind.”

Kovatsenko plans to return to Speed School after her Fulbright year to complete her Master’s in Bioengineering and then apply to medical school.

Kathryn Vanderespt has never traveled outside the country, and that was a big part of the draw for her to do her Fulbright research in Slovenia. ”I love talking to new people and getting to meet other people, and to be able to experience different cultures,” said the chemical engineering graduate. Her affinity for research also played a big role in the decision.

“I had taken a class about wastewater management and had learned about multiple fluorides bonded onto the carbon atoms, and it’s a great compound,” said Vanderespt. “It’s water resistant, it’s oil resistant, it’s heat resistant, and because of that, it doesn’t degrade ever, and I found that very interesting.” A Slovenian researcher is doing preliminary research in this area, so Vanderespt was intrigued.

“As an EU country, Slovenia just joined a new Green Deal,” said Vanderespt.” One of the key factors they are moving towards is a goal by 2030 to make it a law for all citizens to have access to clean water,” she said.  I think it will be fun to research something that is already really valued within the country.”

One thing Vanderespt valued about her Speed School years was being supported by both professors and other students. “With the professors, I just said, ‘I think I would like to try research,’ and almost immediately, there were so many professors that were willing to take me in and tutor me and grow me as a researcher. It really helped me find something I’m passionate in, which is researching and looking into problems and problem solving, which kind of goes hand in hand with engineering.”

As for student camaraderie, Vanderespt said she welcomed her time tackling things together with classmates. “You’re a freshman and you’re sitting in your dorm and have no idea how to do this math homework and you go to the sitting room,” she said. “All of a sudden, you’re surrounded by 12 other students that don’t know how to do the homework, either and you all have to work together. I really love my chemical engineering friends.”

Why would she recommend Speed School to other potential engineering students?

“I think Speed School is for anybody who wants real engineering experience right off the bat because co-op is built into the curriculum,” said Vanderespt. “They can teach you the concepts, but until you’re out on a plant looking at a pump, and seeing how it works, it’s just not the same. Speed School is really, really good for anybody that is willing to push their boundaries.”

Vanderespt hasn’t yet decided definitively what her plans will be post-Fulbright but she is considering that the research she’ll be conducting could jumpstart her into a PhD.

“I found that my outstanding professors at UL have been ones that have gone into industry, really gotten an in-depth understanding of chemical engineering and then come back and taught it,” she said.

Reese Bergschneider is from small-town Taylorville, Illinois and was attracted to “the city dynamic of the UofL campus” when he was looking for a college to attend. But being selected for the Brown Fellows program sealed the deal for the chemical engineering graduate. The scholarship program matches you with a class mentor throughout your four years who guides you through enrichment projects, like traveling to Paris, France and a Shanghai Study Abroad program. Bergschneider realized how much he enjoyed international travel. “It’s just an enriching experience, in and of itself,” he said.

“It also really opened my eyes to things I was doing my parents had never done,” said Bergschneider. “I was getting to go all these places and explore. I feel like it’s really easy for people to be close-minded because they don’t travel a lot, even within their state or country.”

With graduation behind him, he will soon be traveling to Indonesia to teach English there for a year for his Fulbright. His Shanghai trip fueled his decision to explore Indonesian culture and cuisine as well.

In fact, Bergschneider said he chose chemical engineering as his engineering discipline because of his interest in food and cooking, and the projects he was involved with in his Speed School career reflect that mentality. For his third Co-op rotation, he worked on a farm in Austin, Texas for three months where he learned about sustainable agriculture practices and led two cooking workshops.

“I worked with bee hives extracting honey from bee colonies, visited farmers’ markets, community farms and even worked in a farm to table restaurant,” he said.  Teaching in Indonesia might not seem very connected to that, but the graduate has been a REACH tutor and a Cardinal Success Coach at the Disability Resource Center. “Teaching is really an appealing career path to me as well because it’s so hands-on and one-on one with students, and you’re having a direct impact in their lives,” he said.

Bergschneider’s plans beyond his Fulbright year are tentative. He applied for multiple programs before his Fulbright came through, including Teach for America, where he has deferred his offer to teach high school math in San Antonio for two years. “I might revisit that, or other options are to reapply for the Fulbright in Indonesia or just stay over there and continue to work or study,” he said.

When he flies to Indonesia, Bergschneider said he will carry some of Speed School with him. “The high level of academic rigor, and being able to persevere through it, helped me develop tenacity and the ability to work hard and get good results. I’ve been able to apply that to a lot of other aspects of my life.”