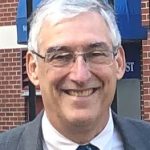 Henry Kannapell has been awarded the 2021 Professional Alumni Award in Electrical and Computer Engineering. With his BS in Science and Masters of Engineering in Electrical Engineering from Speed School in 1980 and 1981, Kannapell also earned a Master’s in Computer Science from Stanford University in 1993. Kannapell grew up in Prospect, KY.

After participating in Speed School’s Co-op program, where he worked for Bell South and the L&N Railroad, he started his career at Mead Office Systems in Dallas TX, a startup funded by the Mead Paper company. “I learned from an older generation of Military and Defense professionals,” said Kannapell. They had a careful, reliable way of doing everything,” he said.

Kannapell said, “Speed School required us to develop focused study and task management to handle the workload.” It also helped him spark a life-long interest in computers, something that paved his career path.

In 1984, he made his way to Telex Terminal Communications in Raleigh, NC, where he designed IBM 3270 compatible data systems, and became a key systems architect of the next generation family of products.

Looking for new challenges, he accepted a job with Apple Computer in Cupertino, CA in 1989. His biggest contribution was developing a personal VHS video editor (for which he was author or co-author on 5 patents) and managing the development of a SCSI disk manager. In 1993, he moved to Gainesville, GA, and took a job with the leading maker of CPU upgrades for Apple computers, this time as a software engineer. He revolutionized the testing process by creating a series of automated tests for new releases, and rose to become Director of Engineering. In 1998, he joined Sonnet Technologies, based in Irvine, CA.

He became Principal Engineer and when Apple and Intel introduced Thunderbolt technology in 2011, Kannapell led the company’s involvement in the technology. This is now the basis of almost all of Sonnet’s products.

In his personal life, he got involved in Rowing as the 1996 Olympics brought a venue to Gainesville. He won two gold medals in National Competition in his age group in the Mixed 4+ and Mixed 4x. He is currently an active Triathlete. He lives in Gainesville with his wife, Cecily. They have two daughters, Julia, who lives in Austin, TX, and Claire, who lives in Madison, WI.