Outstanding Student Honoree Leader In and Out of Classroom 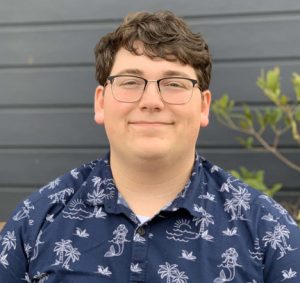 When Matthew Newcomer was a boy, he was fascinated by the work his father did as an applications engineer for a water company. It was those experiences, in part that set him on the road to Speed School. “I always liked math and chemistry, and in the back of my mind I always thought about being a chemical engineer,” said Matthew. In just a few days, Matthew will realize that ambition and be awarded his undergraduate degree in Chemical Engineering. In addition to his scholarly achievements, however, he has also been named Speed School’s Outstanding Student for spring 2020.

The outstanding student award is given to the student who most exemplifies the attributes of the college, which include character, leadership, service and scholarship. The recipient is honored in the University Commencement Book, and will serve as banner bearer, leading the Speed School graduates into the university-wide Commencement Ceremony, which has been rescheduled for the winter due to COVID-19.

Matthew grew up in Carrollton, Kentucky and was drawn to Speed School because “it was so inviting with the co-op program and stories I’d heard from previous students. I was told the professors were really good.”

His Speed School experience surpassed his expectations. “In the chemical engineering department, the professors take a really problem-oriented approach, so in class a lot of it is working through problems and doing in-class assignments,” said Matthew.

“With the professors and the way the curriculum was set up, it really let me lean into the way I learn best – through solving problems. There is also enough variability in the program that I was able to explore different things I find interesting, and the professors are really supportive of that. I would recommend Speed School to others based on the way you’re allowed to individualize your education,” he said.

One professor who Matthew said was inspiring to him was Gerold Willing, Associate Professor in Chemical Engineering. Willing said he has taught Matthew in several classes over the years. “It’s been a pleasure to have him in class. Matt is in the top end of his class, and yet he is this down-to-earth guy who interacts with the entire class,” he said.

“He’s one of the guys other students look to if they’re struggling.” Willing said Matt has a gift with helping other students. “He’s got a way of putting into perspective that his fellow students can understand –to put it into terms where others can say, ‘Aha, I got that.’”

Beyond academic excellence, Matthew has also been involved in a number of service activities on campus. As part of the American Institution of Chemical Engineers (AICE), he led the calculation and design team for CHEM-E Car competition.

He’s also an officer of Tau Beta Pi, the honors engineering society. But he said he feels his biggest service opportunity has been with Sojourn College, a campus ministry. As a community group leader, he led bible study. “Besides the impact of having a Christian community; for me personally I have developed leadership skills. I have a real appreciation for that organization.”

When Matthew graduates in May, he is not saying goodbye to Speed School for long. He plans to return next term to pursue his Masters of Engineering degree. His co-op was at a plastics company in Shelbyville, and his future plans may include a similar environment working in the areas of process controls and improvement. “After I’m done with my Masters, my dream job would be somewhere where I can be in all areas of the plant a little – computer systems but also talking to operators – somewhere on the bridge between floor and management.”

Matthew said he was a little confused when he heard he was being named Outstanding Student. “I thought, ‘who me?’ I feel so honored just to be in that place of service for Speed School.”