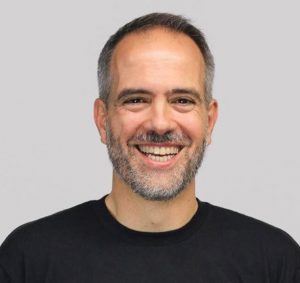 For four years, Speed School alumnus Lawrence Portaro has been managing an innovation accelerator that combines a global co-creation community with a state-of-the-art micro-factory to invent next-generation appliance products.

Thousands of people each year join FirstBuild’s free makerspace on the University of Louisville campus and online community at FirstBuild.com to showcase their creativity, share their passion projects, and see what FirstBuild is working on next.

Portaro received his Master’s Degree in Engineering at Speed School, and has also earned his Master BlackBelt Lean Six Sigma Certification. Before joining FirstBuild, Larry spent nearly 25 years at GE Appliances, where he last served as the technology leader for its cooking business and oversaw industry firsts, such as the French door wall oven and next generation induction controls.

“Through my time at Speed, I found I truly enjoyed solving problems and designing solutions and it led me to my first role at GE Appliances,” said Portaro. “I love creating products that people want to own and use,” he said.

Portaro said he has continued to return to lasting lessons gleaned from Speed School throughout his career, in both professional and personal ways.

I developed a level of self-belief that has helped me throughout my career,” he said. “At first at Speed School, I honestly questioned whether I would able to get through the initial coursework, but with each semester I proved to myself that I belonged, and really began enjoying the challenges that came in the higher level coursework,” he said.

In addition, Portaro said that Speed taught him “the power of perseverance, first through the early STEM coursework and then throughout my master’s degree. I also learned the importance of building relationships. I made lifelong friends in those late night study groups,” he said.

Portaro said being selected for the Alumni Professional Award is a significant honor to him. “It’s very meaningful to be recognized by the people who helped set you on your path.,” he said. “Throughout my time at UofL, I felt supported both academically and personally. My professors’ personal interest in my learning and my success launched me into an exciting career where I could continue to call Louisville home,” he said.

Today, Portaro works directly with Speed School students and faculty through his role at FirstBuild.  “I am grateful to be able to give back some of what UofL has given to me and I am humbled by this recognition.”

Related
VIEW ALL THE AWARD RECIPIENTS FOR 2020