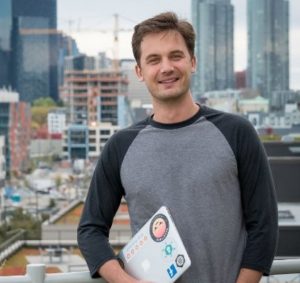 Dr. Aleksey Fadeev is the recipient of the  Professional Award in Computer Science & Engineering for 2020.

Dr. Aleksey Fadeev said one of his favorite memories of Speed School, where he received his PhD inComputer Science and Engineering, was that he distinctly remembers being pleasantly surprised at the advanced equipment he had the opportunity to use there. “I had never had the chance to work with such powerful hardware before,” he said. “For example, I used a custom hardware card for 3D visualization of MRI scans.I felt like I was in a sci-fi movie.”

For the last six years, Fadeev has had a tangible role to play in moving that sci-fi vision forward by building and leading Data Science teams at Facebook. Since 2018, he has been Director of Data Science and Analytics developing communication products at Facebook Messenger, WhatsApp, and Instagram Apps.His team is contributing to a significant change in the messaging and communication industry landscape by building a common protocol and interoperability across the three largest apps in the world used by more than 2 billion people.

Prior to his current role, Fadeev led a data team that contributed to the scaling of Facebook’s ads to become one of the largest advertising businesses in the world by growing revenue from $8B/year to over $40B/year. In his role, he was also able to promote two formerSpeed School classmates coming on board at Facebook. “They have worked with me, and I was super happy to recommend them and help in their interview process. I knew they were rock stars from the time we studied together, and later over the years when we kept in touch,” he said.

From the first job after his PhD to today, Fadeev said his Speed School education had a profound influence on his career path, from fundamentals to expertise. “It was there that I had my first exposure to real work on a real project where we had to deliver a system that performed better and on time. It takes an enormous amount of effort, attention, and tries to find something that works. That has not changed since then and is true for every project I have been working on since. I am glad I had this lesson early in my career and had all the support and mentorship to get through it,” he said. “It would be really fair to say that without going through Speed School’s PhD program, my career would have been very different.

The engineer said he is honored and humbled to receive the Alumni Professional Award for Computer Science and Engineering. “I hope it would serve as inspiration to all students of Speed School who are looking forward to starting their career and achieving success in the industry.”