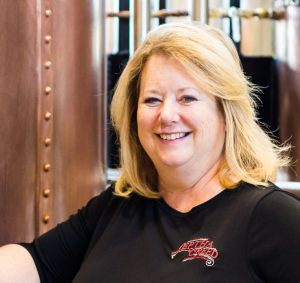 As far back as she can remember, Joyce Nethery has had a passion for chemistry. She earned a Master’s degree in chemical engineering from the University of Louisville’s Speed School.

After graduating from Speed, Nethery had a varied and rewarding career working in the industrial distillation unit for a chemi­cal manufacturer, then spent a decade teaching high school chemistry and physics before her husband Bruce’s dream of opening a distillery reignited her passion for the distillation process.

At first, Nethery wasn’t so sure, but she attended Moonshine University — a six-day crash course in distilling offered in Louisville — in January 2013. And that’s when she fell back in love with engineering. “I could see this vision for this ground-to-glass distillery, that we had a story from our agricultural roots and, with my engineering, we could distill it into a value-added product. I came out of the class with that vision.”

Owned and operated by dynamic mother-and-daughter Nethery and her daughter Autumn, Jeptha Creed Distillery sits in Shelbyville, Kentucky on 64 acres of farmland, where they grow the Bloody Butcher Corn they use for all of their products. Using that corn, they produce vodka, moonshine, and bourbon.

The master distiller said lessons learned at Speed School were instrumental to her success in the distillery business. “My engineering career path was influenced by Speed School in the disciplined thought processes we were taught,” said Nethery. “Disciplined, logical thought processes that engineers use have influenced every career position I’ve ever had – like being a distillery owner!”

Nethery said her favorite memories of Speed School start with the walk to class from the dorms. “To get to Speed School from the other side of campus means crossing Eastern Parkway and leaving all the rest of UofL behind and entering our own Engineering world. I always felt really special when crossing the road and entering the Engineering Side,” she said.

The award winner also credited Speed School with giving her the drive to take on an unexpected route. “This award is a real special honor to me,” she said. “Speed School, and the Chemical Engineering department especially, gave me the confidence and skills to make some pretty crazy career moves that led to being uniquely qualified to build and run a distillery from the ground up. The greatest life lesson I learned at Speed School is to keep going and keep working even when you think you are going to fail,” said Nethery. “The things I learned at Speed have touched every part of my career and I am so blessed to be recognized by the school that has given me so much.”

Related
VIEW ALL THE AWARD RECIPIENTS FOR 2020