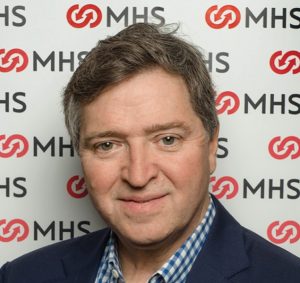 Speed School alum Greg Judge said he remembers thinking that once he had completed his first year of Speed School, that maybe he had a chance to finish. “I remember being a little intimidated by the level of intellect, and thinking that maybe I should have paid a little more attention to high school calculus and physics,” he said. But Judge persevered and went on to earn degrees in engineering, business and an MBA from University of Louisville.

He eventually co-founded a material handling company, MHS(Material Handling Systems),with two other UofL graduates, Tony Mouser and Scott McReynolds.“For me, Speed School put together some of the building blocks of knowledge, discipline, work ethic and instilled the confidence that led to the founding of MHS,” said Judge. “We had the great fortune of having one of the best engineering schools in the country in our back yard, and being surrounded by fantastic UofL alumni as we built MHS from a one-room office to a global powerhouse in our industry,”said Judge.

Today as the President and Co-Founder ofMHS, Judge has more than 35 years of experience in the material handling and conveyor industry. Under his leadership, MHS has grown to become the leading provider of material handling solutions in Global Automation and E-Commerce markets. Based in Louisville, the company now employs over 2,000 worldwide. Prior to co-founding MHS in 1999, Greg worked for companies including Northrop Grumman and Sandvik Sorting Systems.

“Engineering (all disciplines) is front and center in so many of the most important endeavors going on in the world today,” said Judge. The MHS president said he often has the opportunity to talk with young engineers and co-op students. “I tell them that individual professors and fellow students can make a lifelong impact on where you end up. I hope that I can inspire them, a little bit, to let their talent and work ethic take them wherever they want.”

What does this Alumni Professional Award in Mechanical Engineering mean to Judge? “I was inspired by my Aunt to pursue a degree in Engineering, and although I literally had no way to pay for it at the time, I found a way,” said Judge. “It allowed for incredible experiences, and the ability to help others in ways I could never have imagined.”