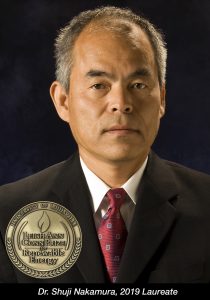 Nakamura is recognized for scientific innovations and commercialization of efficient solid-state light-emitting diodes (LEDs), which have revolutionized electronics and lighting at more than 10 times the efficiency of incandescent lighting, more than twice the efficiency of fluorescents and a durability of 30 to 40 years. His innovations have enabled efficient use of energy, reduced the burden on the environment and helped create sustainable lighting worldwide.

Solid-state lighting and electronics are estimated to save $98 billion in cumulative energy consumption by 2030 in the United States, or the energy equivalent of 30 1-gigawatt power plants. Worldwide, the effects are five times greater.

In March 2020, Nakamura will give a free public talk in Louisville about his winning work and achievements, trials and tribulations. He will receive the Conn Prize medal and $50,000 award at a formal ceremony.

“Dr. Nakamura is a world-class scientist dedicated to the viability of LED technologies. His work and perseverance are inspiration to us all. The University of Louisville celebrates his research and its positive influence. In a world where energy use must be environmentally responsible, he is an outstanding winner of the Leigh Ann Conn Prize,” said UofL President Neeli Bendapudi, who will confer the award.

The prize, administered by UofL’s Conn Center for Renewable Energy Research at the J.B. Speed School of Engineering, is named for the late daughter of Hank and Rebecca Conn, who are center supporters and the prize benefactors.

“The impact of Dr. Nakamura’s work is massive and exactly what Leigh Ann thought mattered most — What good is innovation if it never changes the world?” Hank Conn said. “LED lighting touches people in all economic strata, saving energy and money with global reach. It is exciting to recognize this outstanding scientist, his innovations and their translation into clearly impactful technology.”

Nominations for the 2021 Leigh Ann Conn Prize competition run Jan. 1 to Dec. 31, 2020; criteria and directions are at leighannconnprize.org. For more information, contact Andrew Marsh at 502-852-8597 or LeighAnnConnPrize@louisville.edu.