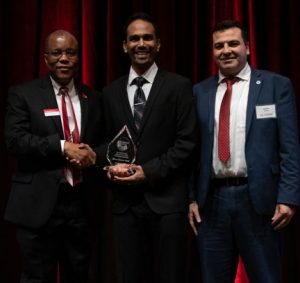 Dhruvinkumar Patelwas presented with the 2019 Outstanding Young Engineer in Bioengineering during the annual Speed School homecoming dinner held October 25 at the Brown Hotel.

Patel graduated from the University of Louisville’s Bioengineering Department in 2012 with a Master of Engineering degree. During his studies he served as a researcher in the labs of Drs. Andre Gobin, Robert Keynton, and Martin O’Toole. His work on synthesis of Gold nanoprisms and nanoshells led to eight publications (including a textbook chapter), two patents, and numerous conference publications. He received the Joseph Henry Award in Bioengineering at UofL and has returned as a guest lecturer on numerous occasions.

Dhru’s career path has guided him through engineering jobs at Ethicon Endosurgery, Energy Delivery Solutions, and finally to his current position as Senior Quality Engineer at Symmetry Surgical in Louisville, KY. He works hard to keep the entire product line within the scope of FDA and EU MDR regulatory guidance.

Dhru was consistently an excellent lab-mate, hard worker, great student, and all around great person. He always surpassed expectations during his tenure at the University, and continues to do so in his current position at Symmetry Surgical.