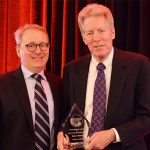 The 2018 Professional Award in Mechanical Engineering was presented to Bob Brand during the annual Speed School homecoming dinner held October 26 at the Brown Hotel.

After starting his career as an engineer at GE’s Appliance Park, Bob continued his education during evenings, earning his Master of Engineering degree in 1974 and his MBA (with Honors) from the UofL Graduate School in 1975.  In 1978 he earned his JD from UofL’s Brandeis School of Law and launched a career combining his engineering and legal interests.

Over the course of his career he handled primarily intellectual property, product safety and product litigation matters as a corporate lawyer for several Fortune 500 companies.  In 2010 he retired from the Harley-Davidson Motor Company where he had served as Senior Director, Chief Products Counsel with worldwide product integrity and product litigation responsibilities.

Following his retirement in 2010, Bob and his wife, Nancy, relocated back to Louisville where they are active in several non-profit causes and enjoy their role as avid UofL Cardinal fans.